The Next Big Sports Food Is… Algae?

The Next Big Sports Food Is… Algae? 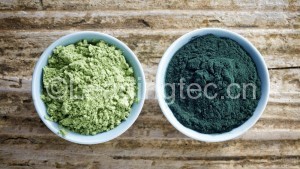 The so-called superfood is attempting a comeback, but don’t be fooled by its siren call

Boston company ENERGYbits is selling algae strains spirulina and chlorella as the next chia seeds: power supplements that improve stamina and reduce inflammation. The algae is sold in one-calorie tablets about the size of an Advil, and the company recommends taking 30 spirulina tabs 15 to 20 minutes before exercise, then another 30 chlorella tabs immediately following in order to get algae’s full endurance and recovery benefits. Promised superhuman power as motivation, I recently found myself standing in my kitchen with a palmful of green pills, wondering if I could down them all in one gulp. (It took two.)

ENERGYbits isn’t the first organization to market algae as a superfood. After World War II, several U.S. institutions looked into growing algae to feed a booming population because they thought it’d be relatively easy and cost-efficient to grow, and researchers liked chlorella’s high vitamin, mineral, and protein content.

The former turned out to be false. Cultivating algae was difficult and expensive, so it never really took off as a mass-market food that could solve world hunger. But the second part is actually true. At about 60 percent protein, and stuffed with Vitamin A, B vitamins, zinc, iron, and magnesium, among other vitamins and minerals, algae certainly counts as nutritious. For that reason, back in the ‘50s, NASAexplored using it as astronaut food, but abandoned the idea when it became apparent that growing it in space would be unwieldy.

So while algae has shown great potential as human fuel, it’s never become the miracle crop it promised to be. That’s about where algae is now as an athletic supplement: full of promise, but low on delivery.

“Always be suspicious if a product claims to do everything from performance to immune function to preventing disease and recovery—and that it works in all athletes from 100-meter sprinters to ultrarunners,” says world-renowned sports nutrition scientist, Asker Jeukendrup. While fitness pundits have been singing algae’s praises, Jeukendrup is not a fan of concentrated algae supplements for several reasons. He’ll start with protein content.

One serving size of 30 ENERGYbits tabs contains 4.6 grams of protein, Jeukendrup said, the same as in half a cup of milk. One almond, he said, has 25 percent more protein than one tablet. The bits are “a source of protein but I wouldn’t call it a good one,” he concluded. At $2.80 per 30-tab serving, “you can get 30 times as much protein for your money by buying a gallon of milk.”

If the money factor doesn’t get you, the origin of algae’s super-high, potentially focus and energy-boosting vitamin B12 content will. “It’s actually from contamination from insect and animal fecal matter,” Jeukendrup says, because the algae for many supplements is grown in lakes and ponds, then dried. In other words, algae gets its B12 through bacteria.

ENERGYbits CEO, Catharine Arnston, has written that her algae are grown “in fresh water tanks that are carefully monitored and tested every day for purity.” Though some sort of bacteria must be introduced to produce the B12 content. But let’s say you don’t care where the B12 comes from. “Then the question becomes: does it benefit the athlete?” says Jeukendrup. “There’s no evidence whatsoever that an intake of vitamin B12 will affect performance.”

On top of that, he doubts the claim that algae, in this form, will provide instant energy. A serving actually comes in around 20 calories. Which according to Jeukendrup would allow you to run for about 90 seconds.

Furthermore, foods that have concentrated levels of vitamins and minerals generally also have high concentrations of heavy metals like arsenic, lead, cadmium, mercury.

The final blow to concentrated algal supplements builds on this too-much-of-a-good-thing issue. The high concentration of antioxidants may actually stunt long-term training adaptation, though more research needs to be conducted before experts can make any definitive conclusions about that.

With that knowledge, it seems athletes in the U.S. won’t turn algae into the Next Big Thing. As for my one-woman experiment, I did have a fantastic run after downing 30 ENERGYbits (if peppered by a few ocean-tasting burps). I felt strong, alert, and energetic. But it’s impossible to tell if a placebo effect, the fact that I’d taken two days off before that workout, or the algae itself was behind the good vibes.